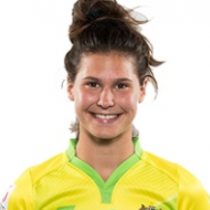 At just 17 years and 327 days, Demi made her World Series debut when she took to the field as a replacement against Brazil in Canada in April 2016. Highly-rated by team management, Demi has the potential to be a classic international Rugby Sevens forward with her athleticism and strength. Demi was a vital cog in the Girls team that won a Gold Medal at the Commonwealth Youth Games in September 2015 in Samoa.

Commencing 2017 off with a win as part of the Women's team at the Central Coast Sevens, Hayes then backed up with impressive performances for Griffith University, during the Aon University Sevens Series coming in fourth place alongside Aussie Women's Sevens teammate Shannon Parry.

She has been included in the Women's Sevens squad for the 2018 Rugby World Cup.