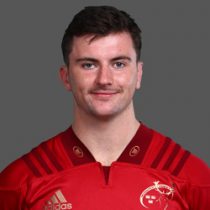 A Cashel native, Barron started his rugby career with the Cashel RFC Minis before playing his schools rugby with Rockwell College, where he won a Munster Schools Senior Cup medal in 2015.

Barron was in the Ireland U18s second team and then made the U19s and played in the Junior World Cup a year under age. Having also represented Ireland U19s Barron was added to the Ireland U20 squad after a late call-up.

The Garryowen man was added to the squad list for the 2017 World Rugby Under-20 Championship. The hooker has represented Munster and Ireland at a number of underage levels and made his senior Munster debut in the Guinness PRO14 loss away to Cardiff Blues in September 2018.

He became the fourth Greencore Munster Rugby Academy player registered in the side's senior team when he was added to the province’s Champions Cup squad in January 2020.

In June 2020, he was promoted to the senior squad after two years in the Greencore Munster Rugby Academy.