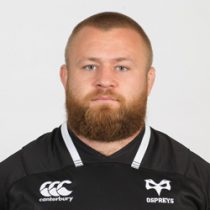 Hailing from Moldova, Arhip joined the Ospreys in the 2012 season after previously playing with Dinamo Gaz Sud Burcuresti and with Welsh Club Bridgend. In his first year with the Ospreys he claimed 9 caps, scoring one try in his debut season.

Arhip has gone on to claim international Honours with his home country Moldova.

During his five seasons at the Ospreys, he built a reputation as one of the best tight-heads in Europe with his destructive scrummaging and his work in the loose, both as a carrier and in defence.

In July 2018, he signed a deal with Cardiff Blues, becoming the first signing of the John Mulvihill era and a major boost to Wales’ Capital Region.

He made his debut at the Cardiff Arms Park against Leinster.

As of May 2020, he has made 22 appearances for the Cardiff Arms Park side.