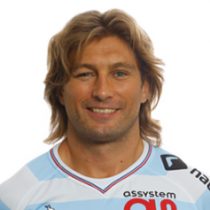 Dimitri Szarzewski is a stalwart of French rugby. Beginning his career with Beziers in 2002, the robust hooker moved to Stade Francais in 2005 where he began to make a name for himself as a powerful operator in the loose as well as an accurate line-out thrower.

After 7 years with Stade, Szarzewski made the controversial decision to swap Paris sides, signing for Racing Metro in 2012.

Szarzewski's final test appearance for France came against the All Blacks where France were humbled in the quarter-final in 2015.

In May 2019, he announced his retirement from all forms of the game with immediate effect saying "All these years, I haven't been saved from injuries, but now my body says stop. Rugby hurts,".

Szarzewski now will take up a role as a coach in Racing's academy.

He also won the French Top 14 with Stade Francais in 2007 before crossing Paris and lifting the title with Racing nine years later.