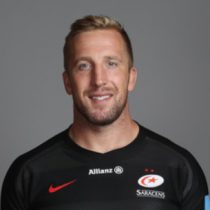 Born in Pembroke, Wales, Day stands at almost 2 metres in height and over 18 stone in weight. An imposing second row forward, Day has earned himself a reputation as a powerful ball carrier and reliable lineout operator.

Having represented Wales at underage level, Day earned himself a contract with the Scarlets where his professional career began.

Having represented the West Wales side on over 100 occasions, Day left Llanelli and took up a contract with Bath. To date he has made nearly 100 appearances for the club. The lock has made 2 Test appearances for Wales to date and has also been included in their 2015 RWC squad.

In August 2016, after a ten-year career in the Pro 12 (Europe), England Premiership (England) and Top League (Japan), Day signed a one-year deal with the Rebels.

In April 2017, Saracens completed the signing of Wales international lock forward Day for the for the upcoming 2017/18 season.

31-year old lock-forward Day will join the north Londoners on a two-year deal from Australian Super Rugby side Melbourne Rebels.

The former Scarlets and Bath star made his Wales debut against Ireland in Cardiff in 2015, featuring for his country in the World Cup against Uruguay and has played in Japan for Toyota Verblitz and the Rebels since leaving the Aviva Premiership in 2016.