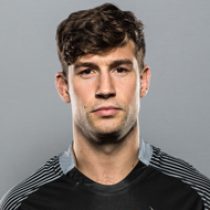 Born in London, England, Waldouck is a skillful inside centre with ball distribution second to none. A solid defender, Waldouck attended Latymer Upper School and is a former member of Fulham football club's academy.

He began his professional career with London Wasps and made his debut for the club in 2006. In 2007, Waldouck earned himself a Heineken Cup winner's medal as Harlequins beat Leicester Tigers at Twickenham. In July of 2012, Waldouck left Wasps to join Northampton Saints.

On 8 April 2016 it was announced that Waldouck would leave London Irish for the USA and join Ohio in the newly formed PRO Rugby.

Waldouck then joined Newcastle Falcons in August 2016 on a month's trial, performing well enough to be handed a permanent deal with the club.

Dominic signed a new contract with Newcastle Falcons which also allowed the experienced centre to study at Oxford University.

In July 2019, he re-signed with the club on a player/coach basis. A year later, Waldouck signed for Gloucester as the side's new defence coach.