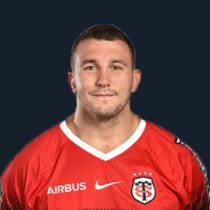 Arriving from Blagnac, Aldegheri joined the Toulouse academy in 2007. He developed quickly as a tight head with bags of potential.

Made his first-team debut in 2013 against Racing 92 at the Stade Ernest Wallon.

After a full 17-18 season with 26 appearances overall competitions, Dorian Aldegheri cemented himself as a regular in the side.

An injury in the fall of 2018, hindered his rapid rise as he was sidelined for 2 months.

On his return to fitness, he was selected in the 2018 Six Nations squad. He featured as a substitute 4 times during the competition. However, an injury to his knee ligaments during the last match in Italy ended his season ruling him out of the World Cup in Japan.

He was recalled to the France squad ahead of the 2020 Six Nations with 4 test caps all of which coming in the Six Nations, however, he suffered an injury ahead of the competition and was subsequently ruled out.