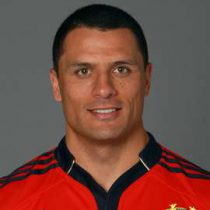 Doug Howlett has amassed trophies and accolades like no other player in Rugby Union history, thanks mainly to his awesome finishing and pace.

Not only is Howlett the All Blacks top ever try scorer, 49 tries, but he joins Rod Kafer and Brad Thorn as the only players to win both the Heineken Cup and the Super 14 trophies.

Howlett has played with three Super Rugby teams, briefly with the Highlanders and Hurricanes and, for the majority of his career in his home country, the Auckland Blues until 2007 when he signed for Munster.

He made 114 appearances for Munster, also receiving the honour of captaining the team for the 2012-2013 season.

In May 2013, it was confirmed that Howlett, after receiving medical advice, would retire from rugby due to a shoulder injury he sustained playing against Glasgow Warriors in March 2013.