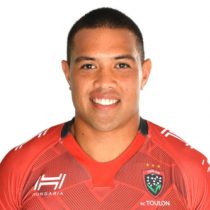 Paia’aua grew up in Rockhampton, where he played Rugby in high school and twice represented Queensland in Under 16s.

The then 19-year-old transitioned to Rugby league following high school and spent two seasons with the Brisbane Broncos under-20s side in the National Youth Competition, before signing with the Reds ahead of the 2015 season.

He entered the 2017 Super Rugby season with 5 points scored in 8 appearances since his debut against the Brumbies in 2015.

Paia'aua made an appearance in all 15 of the Reds Super Rugby matches during the 2017 season, operating at inside centre, fullback and flyhalf.

He started the match against the Barbarians and scored his first try in Gold and Green.

He captained the Queensland Countryside to a fantastic season that saw them go from the bottom of the log in 2016 to champions in 2017.

Paia'aua went into his third Super Rugby season with 23 caps and 3 tries.

In August 2018, he was named captain of Bond University Queensland Country for the second-straight year.

February 2019 saw him sign a three-year deal with Toulon.