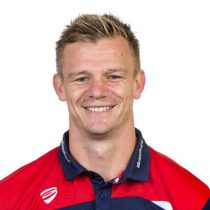 Born in Carmarthen, Wales, Peel was sniping scrumhalf known for his accurate passing. Having attended Swansea University, Peel began his career with Llanelli Scarlets and spent five seasons there during which time he became a key figure in the Welsh national side.

In 2005 Peel was named in the British and Irish Lions squad to tour New Zealand and featured heavily in the test side.

He signed for the Sale Sharks in 2008 and amassed over 100 caps for the side before heading to Bristol Rugby in 2014, where he was appointed club captain.

Peel made twenty appearances as a player for Bristol, before joining the coaching staff at the beginning of the 2016 season.

The former Wales and British and Irish Lions scrum-half was then revealed as the latest addition to the Ulster backroom team for the 2017/18 season, signing a two-year deal as assistant coach.

January 2019 saw him sign a new two-year contract extension with the club ahead of the 2019/20 season.