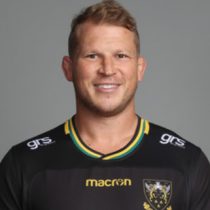 The New Zealand born hooker has been one of the Northern Hemisphere’s foremost hooker for the last number of years. Hartley who moved to England at the age of 17, initially played with Worcester Warriors before switching to his current club, Northampton Saints.

Upon arriving in England, Hartley was almost instantaneously capped by England’s U18 side. Hartley would soon add U19 and U21 caps to his U18 caps before, in 2008 in a game against the Pacific Islanders, he made his England senior debut.

His fine Heineken cup form, and overall aggressive playing style, earned him a surprise inclusion in Warren Gatlands 2013 British and Irish Lions touring squad. However he never got to take his place in the squad, following his suspension for four weeks for allegedly swearing at referee Wayne Barnes in the 2013 Aviva Premiership final. Hartley also went on to miss the 2015 Rugby World Cup on home soil after head butting Saracens' Jamie George which lead to a 4 week ban and his eventual omission from the England Squad.

Things have turned around for Hartley since England's poor World Cup campaign, a rich vein of form & new management over England has led to him being named as England's captain ahead of the 2016 6 Nations. The Northampton Saints hooker captained England to a Grand Slam in 2016 Six Nations.

Following the Grand Slam win, Hartley captained England to a 3-0 whitewash over Australia in their Summer tour, during the series he became the most highly capped ever English hooker with 79 appearances to date; after returning from injury in the 2016/2017 season, Hartley was named in the 32 man squad for the November Internationals.

Hartley led England to a comfortable victory over South Africa in the first game of the November Series, ending an 11 year wait for a win over the Boks. Hartley is yet to be on the losing side as captain of his country. This is his 9th sucessive RBS 6 Nations Championship, he has now played in all 40 matches since his debut in the competition against Italy in 2009, he has started the last 15 games.

Hartley captained England to a second successive 6 Nations title in 2017. He became the 3rd England captain in a row to be left out of a Lions tour.

Hartley was named Co-Captain, along with Owen Farrell, ahead of the 2018 November Internationals

in November 2019 Dylan Hartley announced his retirement from professional rugby with immediate effect after he was unable to recover from the troublesome knee injury that has kept him out of action for both Northampton and England throughout 2019.

He retires as the Saints after 15 seasons at Franklin’s Gardens with 251 appearances and eight years as captain to his name in Black, Green and Gold. The Rotorua-born front rower is also England’s second-most capped player of all time, having turned out for the Red Rose on 97 occasions and led the side for 30 Tests as captain.`