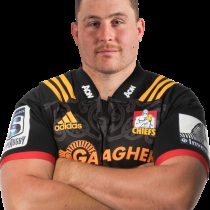 Durban-born loose forward Dylan Nel had a fortuitous journey to Canterbury where he has made a name for himself a powerful try scoring forward.

Nel has former All Blacks captain Murray Mexted and Crusaders coach Scott Robertson to thank for bringing him to Christchurch.

It was a fortuitous meeting with Mexted in South Africa and a call he made to Robertson that brought Nel to New Zealand.

The busy flanker made his Mitre 10 Cup debut for Canterbury in 2016 against Counties Manukau.

Nel's work ethic, commitment and skills helped him be picked for the Crusaders Knights second tier squad. He was also rushed to South Africa as cover when Crusader and All Blacks captain Kieran Read broke his thumb in 2017.

He featured for Canterbury again in 2017 notably against Wanganui in a Ranfurly Shield clash.

He made the move to Otago where he picked up Mitre 10 Cup contract with the side ahead of the 2018 edition of the competition.

Nel was named for the Chiefs squad ahead of the 2020 Super Rugby season.