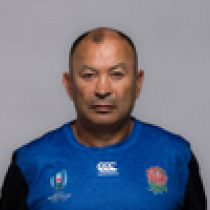 A hooker in his playing days, Jones made 3 appearances for Leicester during the 1991/92 season in England.

He gave up a career as a teacher to coach his old club, famous Sydney side Randwick, in 1994, before spending three years in Japan, returning in 1998 to take charge of Super 12 side the Brumbies.

His first major piece of silverware came in 2001 after leading the Brumbies to their first Super 12 title, and in doing so becoming the first side from outside New Zealand to win the tournament.

He took charge of the Wallabies between 2001 and 2005 and delivered Tri-Nations and Bledisloe Cup success. The national side reached the 2003 Rugby World Cup final on home soil, losing narrowly to England.

Jones was then sacked in 2005 after a run of eight defeats in nine games.

He has since had two spells at Premiership club Saracens as a consultant, as well as assistant to the South Africa side that won the World Cup in 2007.

Jones took the Japan job in 2012 and lead over a period of unprecedented success, including a run of 10 successive wins, a record for a tier two nation, and beating South Africa in Brighton.

In November 2015, he agreed a 4-year deal with England, replacing Stuart Lancaster for the coaching role. In January 2018, Eddie Jones signed a two-year contract extension to remain in his position as England head coach until 2021.

By April 2020, Jones had led England to two Six Nations titles - including a Grand Slam in 2016 - a 3-0 series victory in Australia and an 18-match unbeaten run.

He signed a new deal until the 2023 Rugby World Cup in April 2020 after leading England to the 2019 Rugby World Cup final. At the time Jones' 78 per cent win ratio is the best of any England coach in the nation's history.

The Australian has overseen 42 wins in 54 Tests as England coach, including leading them to last year's Rugby World Cup final, where they were beaten by South Africa.

On signing the new deal Jones said: "We set out four years ago to be the best team in the world and unfortunately we missed that by 80 minutes. Now we want to be the team that is remembered as being the greatest team the game has ever seen. It's a big ambition but I believe we are capable of doing it."

World Rugby Coach of the Year 2017