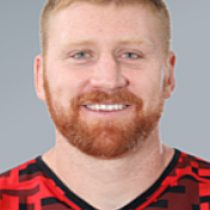 Quirk ran on in the No.7 jersey for the opening two matches of the season against the Western Force and NSW Waratahs, taking on Wallabies supremo David Pocock in his starting debut before locking horns with Waratahs skipper Phil Waugh the following week
in Sydney.

The powerful red head brings a hard edge to the forward pack and also valuable versatility with the ability to slot in comfortably at No.6 or No.8.

In 2017, he signed for Japanese Top League side Canon Eagles.