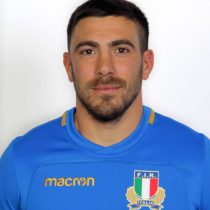 Talent to follow for the future, Edoardo Gori has been highlighted in recent seasons, before landing amongst the Lions, with the top of Cavalieri Prato, his hometown team.

Scrum half, but if necessary also available for selection on the wing or full back, Gori is characterised by the strong personality enough to be chosen as captain of the National Under 20.

Italy A debut came against Romania in 2009, made his full test debut as 20-year-old v Australia in Florence, November 2010 Played in all Italy's games at RWC2011 in New Zealand, scoring a try against Russia.

In 2015 he was called up to the Italian squad for the Rugby World Cup in England. Started all four games in RWC2015 scoring a try against Romania at Exeter.

Had played in 19 successive RBS 6 Nations games until injury ruled him out of last season's Championship, gaining a 50th test cap against Scotland in Rome. Scored a maiden Championship try last week against Wales.

Skippered Italy on their three test tour to Argentina, USA and Canada last summer and also gained three further caps off the bench in the recent autumn internationals.