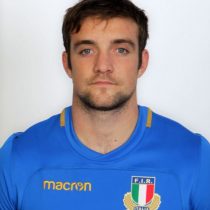 Padovani is a versatile back that prefers to play at fly half but can play at full back and in the centres.

He represented Emerging Italy in two matches during Tbilisi Cup 2014, scoring 8 points against Argentina and another 7 against Spain.

His Test debut came off the bench in last year's RBS 6 Nations 2nd round game against England in Rome. Padovani made a first start against Ireland in round 4, scoring a penalty goal, but injury in this game sidelined him for 6 months.

His Eccellenza debut came for Mogliano against Viadana in September 2012 and helped them to secure the title in his debut season.

His PRO12 debut was for Zebre against Cardiff Blues in Parma in the opening round of the 2014/15 campaign.

January 2017 saw him get included in the Italy squad for the Six Nations tournament before trading Zebre for Toulon in June 2017, having made 34 appearances for Zebre in the Pro12.

Padovani returned to Zebre not long after making just 4 appearances for Toulon.

He entered the 2019 Six Nations with 8 previous 6 Nations appearances and 6 points scored in the tournament.

As of April 2020, he has worn the Italy jersey on 24 occasions by taking part in three Six Nations and a World Cup.