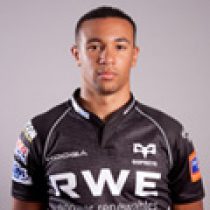 Eli came through the ranks of the regional development pathway after starting out at Gorseinon RFC, and played age-grade rugby for the Eyasses before making his senior debut as an 18-year old, coming off the bench in a Liberty Stadium win over Aironi in September 2010.

He featured nine times in the PRO12 during the 2011/12 title winning season and in total made 81 appearances for the Ospreys, scoring 23 tries. He also played 29 times for Swansea, scoring 13 tries.

Capped by Wales across all the age-grades and named in several senior Wales squads, his one cap came against Ireland in August 2015. His last appearance for the Ospreys was in a 31-7 win against the Blues at Cardiff Arms Park at the end of 2016.

Sadly in March 2018, Walker was forced to retire with immediate effect after not fully recovering back surgery early in 2017.