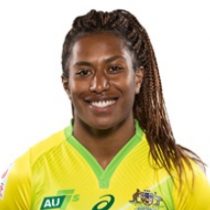 Ellia Green is a sprinter by trade, having previously represented Australia in athletics at the World School Games in Qatar in 2009 and scored a crucial try in the Gold Medal match at the Rio Olympics in August 2016.

Ellia catapulted into the international spotlight when she scored an astonishing 80-metre try against Canada in the three-match exhibition series at the Gold Coast Sevens in October 2014. Within four hours, the try had been viewed over 200,000 times on the IRB Sevens World Series Facebook page.

Undoubtedly the team's biggest character, Ellia was recruited by the Australian Rugby Sevens program after attending a ‘Pathway to Gold’ Talent ID camp in Melbourne in 2012. From here Ellia has gone on to become one of the greats of Australian Rugby.

Commencing the year with an ACL reconstruction, Ellia has endured a tough battle to full fitness as she looks ahead to the 2018 Sydney Sevens, the 2018 Commonwealth Games and Women's Sevens World Cup.