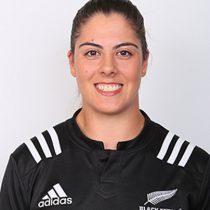 A rare breed that grew up on Great Barrier Island, Eloise Blackwell has, since her 2011 debut for New Zealand, stepped almost seamlessly into the big locking shoes of great Black Ferns such as Vicky Heighway and Monalisa Codling.

Blackwell has been a mainstay of the Auckland Storm since 2009 and has developed into a top international player, strong in contact, mobile around the field and accurate in the air, be it for kickoffs or lineouts.

Blackwell had a great 2017 season for the Black Ferns, starting seven of her eight Tests and striking up formidable locking combinations with both Charmaine Smith and Becky Wood.

In 2018, Blackwell started all five Black Ferns Tests and crossed for four tries. Away from rugby, Blackwell is a secondary school teacher

She has since racked up 37 test caps and scored 7 tries ahead of the 2019 Super Series.