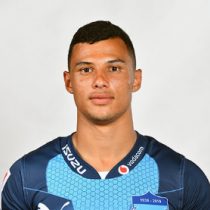 Born in Clanwilliam in the Western Cape Papier showed promise as early as primary school level, as he earned provincial colours by representing the Boland Cavaliers at the 2010 Under-13 Craven Week.

He then moved to Pretoria, where he enrolled at Hoërskool Garsfontein. In 2013, he represented the Blue Bulls at the Under-16 Grant Khomo Week.

Papier had a similar season in 2015; he started all three of the Blue Bulls' matches at Craven Week and was once again included in the South Africa Schools squad.

Later that year Papier starred for the South African youth 7s squad that won gold at the 2015 Commonwealth Youth Games.

He was the first choice scrumhalf for the side as they finished 3rd overall.

Papier is considered to be one of the most talented rising stars in South African rugby and was heaped with praise by new Bulls Coach John Mitchell before his debut Super Rugby season with the Bulls.

The young halfback did not disappoint on his early promise in his first few appearances for the Bulls and was named in Rassie Erasmus' first Springbok squad ahead of the 2018 June Internationals.

The 8 test Springbok scrumhalf then side a short-term deal as Rugby World Cup cover with the Sale Sharks. He made five appearances for the Premiership club, including one start before he re-joined the Bulls ahead of the 2020 Super Rugby season.

In May 2021, he signed a contract extension to remain at Loftus.