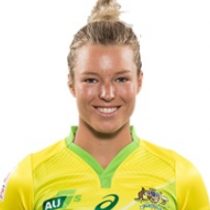 Emma Tonegato scored seven tries in six games - including one in the Gold Medal match against New Zealand - at the 2016 Rio Olympics for Australia.

Kicking off 2017 by pulling on a jersey for the University of Adelaide in the Aon University Sevens Series, Tonegato was a key link in the team alongside teammates Mahalia Murphy and Nicole Beck. Her impressive performances landed her more team selections including the Central Coast Sevens and the Oceania Sevens as well as pulling on the number 5 jersey in December for the first leg of the World Series in Dubai.