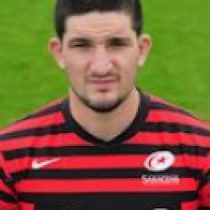 As youngster Sheriff joined Saracens in the 2011/12 season having started his career with Irish club side Leinster. He has represented Ireland at Under-18, U19 an U20 levels and is considered a rising star in the second row. Sheriff gained plenty of experience throughout his career with stints at some of the biggest clubs in Europe, having represented Leinster, Saracens and London Irish.

In May 2016 he signed for London Scottish at the age of 27, following London Irish's relegation to the Championship.