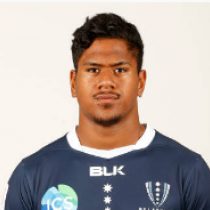 Another Junior Wallaby to make his debut in the NRC Championship in 2017 representing Melbourne Rising, Ha'angana became the Melbourne Rebels youngest-ever Super Rugby debutant at 18 years and 15 days when he came off the bench against the Lions at AAMI Park.

Haangana is a hulking young lock who looms as a future first-choice second-rower for the Melbourne Rebels.