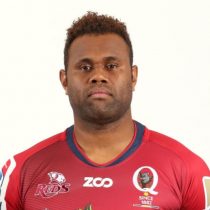 Eto Nabuli grew up playing the 15-man code in Sigatoka, Fiji, but has played Rugby League in Australia for the past three years.

Standing at 197cm and weighing 108kg, Nabuli experienced a rapid rise in his professional career. In 2013 he was named in the NSW Cup Team of the Year after scoring 29 tries in his first season.

In 2014 he made his international Rugby League debut for Fiji and starred for the Panthers in their 2014 NSW Cup Grand Final win over Newcastle. He then signed a one-year contract with the Dragons to play in the NRL in 2015 – scoring seven tries in 13 games.

Nabuli said he enjoyed his time in the NRL but rugby union was his sport, and began full contact training with the Reds in January 2016 after being released from the final year of his Dragons contract.

The former NRL star was rewarded with his first Wallabies cap when he made his debut against Scotland in the 2017 June internationals.

Entering the 2018 Super Rugby campaign, Nabuli had scored 9 tries in 30 matches but will join Top 14 side Bordeaux-Begles for the 2018-19 campaign.

Injuries meant that Nabuli only featured in 8 of the Reds 16 Super Rugby matches during the 2018 season taking his cap tally to 38 with the franchise scoring 10 tries.

The former NRL star signed off his Reds career in style scoring a brace in his final game for the Queensland side.