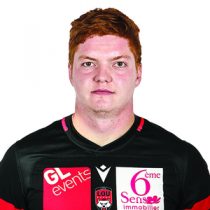 Lambey spent the 2015-16 season on loan at Beziers in the PRO D2, returning to Lyon his parent-club to sign a professional contract for the 2016-17 season.

Lambey proceeded to make 21 appearances for Lyon during that season, 17 in the TOP14 with a further four more appearances in the Challenge Cup.

In June 2017, as his first pro contract with the club expired, Lambey extended his stay at Lyon until 2020.

Since then he has continued to impress and joined the French Barbarians on their two-game tour to South Africa in June 2017, playing a part in both fixtures.

His stellar form saw him being included in France's squad for the 2018 Six Nations tournament but had to wait until June that year to make his test debut against New Zealand in Dunedin.

He missed out on the squad for the Rugby World Cup squad despite earning 10 test caps since his debut.