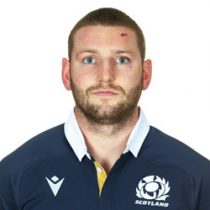 In 2013, Russell spent 15 weeks in New Zealand's South Island, playing for clubs in the local area, as he was a recipient of the MacPhail scholarship to develop his game.

After an impressive season for Glasgow Warriors in 2013/14, he made his debut for Scotland when he lined up against USA in 2014 in the Summer internationals.

Russell was selected in Scotland's 31-man squad for the 2015 Rugby World Cup and scored a try in the team's opening match victory over Japan.

In June the same year, after steering Scotland to two impressive wins over Italy & Australia, Russell was drafted into the British & Irish Lions squad as Gatland looked to increase the size of his squad.

Heading into the 2018 Six Nations, Russell had represented Scotland on 32 occasions and went on to start the 2019 edition of the tournament with 40 test caps.

He played in three of Scotland's group matches at the 2019 Rugby World Cup scoring a try in the loss to Japan, as Scotland failed to qualify for the quarter-finals.

In November 2020, he secured his future at the club with a new deal.

In May 2021, Russell gained selection for the 2021 British & Irish Lions tour to South Africa.