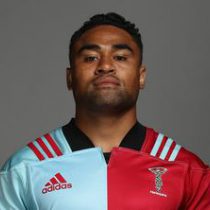 An exciting young talent, Saili is a genuine threat to opposition defence. Saili was part of the victorious New Zealand side that won the 2011 U20s Junior World Championship. He started in the final against England playing alongside Brodie Retallick, Sam Cane, TJ Perenara, Charles Piutau and Beauden Barrett.

In 2013, Saili was capped twice by the All Blacks, debuting against Argentina in the Rugby Championship before facing Japan in Tokyo. He also represented the Barbarians in 2014, in a match against Australia at Twickenham Stadium. Saili joined the province at the end of July on completion of his 2015 contractual commitments with the Blues and is contracted for 2 seasons.

He made 42 Super Rugby appearances for the Blues, scoring seven tries, and represented Auckland in the ITM Cup on 31 occasions. Saili 2016/2017 campaign has been set back due to a shoulder injury ruling him out for four months.

In May 2017, Munster Rugby confirmed that Saili will depart the club at the end of the season. Saili scored nine tries in 40 appearances for the province. In June 2017, Saili joined Harlequins in the Aviva Premiership after spending two seasons in Munster after three years playing for the Blues in Super Rugby.

He is a pacy and exciting centre, with exceptional running skills and a deceptive step. The utility back also has the ability to operate on the wing.

Saili made 34 appearances and claim two tries during his time in South West London before he confirmed that he would be joining Biarritz in the PROD2 ahead of the 2020/2021 season.