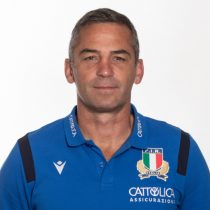 Well known for his expertise on the attacking game, Franco Smith enjoyed in a playing career that spanned over a decade before turning to coaching where he has thrived.

Smith started his rugby journey in Bloemfontein where he went to Hoërskool Sand du Plessis and first started to show signs of promise as he made the Free State u18 side for the famed Craven Week team in 1990.

Having earned his badges at youth level, higher honours were always going to follow for the exciting back as he made his first class debut for the Free State Cheetahs in September 1992 playing centre against Western Transvaal in Round Two of the 1992 Lion Cup competition.

He would remain at the Cheetahs until 1996 when he moved back to the Province of his birth turning out for the Griquas. The switch did wonders for the utility back as he played himself into Springbok contention and was named in a 36-man squad at the end of the year. He toured with the Springboks to Argentina, Wales and France and featured in several tour matches, but did not feature in any test matches.

A test debut wasn't too far away as he earned his first test cap against Scotland in December 2017. At the start of 1998, then Springbok coach Nick Mallett requested that Smith was loaned from the Cats to the Bulls for the 1998 Super 12 season. Once again the move proved fruitful as he quickly established himself in the team and was also the leading South African points scorer at a point during the competition before a knee injury forced him to miss the final four rounds. He would make the move to the Bulls a permanent one soon after.

Having played Super Rugby and Currie Cup for the Bulls in 1999, Smith was signed by Newport and would go on to play 27 games for the side scoring 38 points

Smith's journeyman career would continue from there as he returned to South Africa re-signing with the Bulls. A stint with the Pumas was paired with a short spell with Italian side Bologna while also turning out for the Bulls during the 2001 and 2002 Super Rugby seasons.


Smith returned to Italy to join Treviso at the end of 2002 signing with Treviso, he remained there for four seasons, making 60 appearances for the side. During his time at the club, he won the National Championship of Excellence with them in 2002–2003 and in 2003–2004 and also won the Coppa Italia in 2005

He hung his boots and ventured into coaching with his first foray was to become the backline coach of the Cheetahs in 2006. After 18 months in that job, he returned to Italy to take over as head coach of former side Treviso. He steered Treviso to two National Championship of Excellence titles in 2008–2009 and in 2009–2010, as well as one Coppa Italia in 2010 and one Italian Supercup in 2009.

He resigned in December 2013 and it didn't take long for him to return to South Africa as he was re-appointed in his former role as backline coach of the Cheetahs.

Smith continued to impress with the Cheetahs and was one of two additions to the Springbok coaching squad named by SA Rugby for the 2016 November Tests. In July 2017, the Cheetahs announced a role change, naming Smith as Director of Rugby, with Rory Duncan taking over as Head Coach.

In February 2018, following the impending departure of Rory Duncan to England, Smith decided to return to the Cheeahs on a full-time basis and turn down an offer to remain on Springbok coaching staff under Rassie Erasmus.

In May 2019, Cheetahs confirmed that Smith will vacate his position as head coach at the end of the year to take up a role with Italy. In November 2019 he was confirmed as Italy's interim coach for the 2020 Six Nations while the side searched for Conor O'Shea's permanent replacement.

In June 2020, Smith was confirmed as the new permanent head coach of Italy until the end of the 2023 Rugby World Cup in France.

Smith was moved into a newly formed role of head of high performance in Italy in May 2021 as he stepped down from his role as Head coach of Italy.