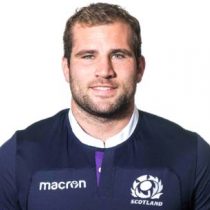 After representing Scotland at Under 18 and 20 levels as well as being selected as captain of the Under 20's in his second season, Brown made his senior debut in 2013 in South Africa during the quadrangular series where he played against Italy.

He made his test debut against Italy in Pretoria, summer 2013 and appeared in all of Scotland's games at the RWC 2015.

Brown won over 40 Scotland caps as of December 2019; and has played in both Autumn Internationals this November. Coming off the bench as a replacement against Australia at Murrayfield and recently starting in a close encounter which resulted in a massive win for Scotland over Argentina.

In 2017, Brown was called into the Scotland Six Nations squad, having previously represent Scotland 5 times in Six Nations without scoring.

In May 2017, he was named in the Scotland squad for their three-Test tour.

At the start of the 2017-18 season, Brown had played 64 times for the Warriors scoring four tries.

He helped Scotland claim a historic win over Australia in June and came off the bench in the first and third tests against Italy in Singapore and Fiji in Suva.

In November he was recalled into the Scotland squad to face Australia having successfully recovered from an ankle injury.

He won four caps during the 2019 Rugby World Cup, twice at hooker and twice on the flank.

In Six Nations the following year he would go on to earn his 50th cap for his country - the fourth player in history to do so at hooker (Colin Deans, Gordon Bulloch and Ross Ford the others) and the 43rd half-centurion overall.

Brown is currently under contract at Glasgow until at least May 2020 and has made over 90 appearances for the side.

In August 2020, he was named co-captain of Glasgow alongside Ryan Wilson.