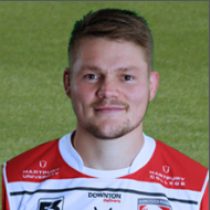 During his three-years at University, Clarke turned out for the University of Bath during which time they won the British Universities and Colleges Sport (BUCS) Rugby Sevens Championship for the first time. He also played for Bath Rugby, helping their A-League side, Bath United, win the A-League title in 2013/14.

The back-row forward joined London Scottish on a full-time contract in 2015 having completed an undergraduate degree in Sports Performance at Bath University.

Clarke joined the Gloucester Academy in 2016, and earned a first-team deal for the 2017 season. And, after 17 appearances, agreed a new longer-term deal with the club.