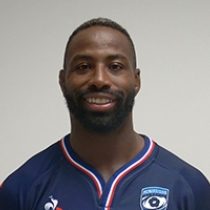 Born in Burkino Faso, moving to France at a young age before taking up the sport of rugby aged six, Ouedraogo entered the underage set up at U13 level, alongside fellow future French international Francois Trinh-Duc.

Having played at various levels of French underage rugby, Ouedraogo made his debut for Montpellier in 2005.

In 2010 he was named club captain, and lead the side to a Top 14 final, eventually being beaten by Toulouse. A pacy flanker with an eye for a gap, Ouedraogao's impressive club form was finally recognized by the French set up in 2008, as he made his debut in a defeat to the All Blacks.

Since then he has all ways been in and around the starting team, despite failing to make the final squad for the 2011 World Cup.

Ouedraogo was selected by new coach Philippe Saint-André in the initial 30-man squad for the 2012 Six Nations Championship, but was not chosen for the first two matches. He was later selected for France's 2012 Autumn Internationals, and was in the starting line-up for all three test matches.