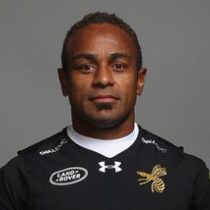 Gabiriele Lovobalavu was born in 1985 in Savusavu, Fiji. A destructive centre by nature, having spent two season playing amateur rugby in FIji, Lovobalavu was snapped up by French giants Toulon and moved to the Top 14.

Having made his international debut in 2007, he was among the youngest players in the Fijian squad for the 2007 Rugby World Cup in France and featured heavily in the games with both Australia and South Africa.

Lovobalavu, who has won 22 caps for his country and represented Fiji in the last three Rugby World Cups (2007, 2011 and 2015), is currently impressing for Bayonne in the Top 14, having joined them from Toulon in 2012.

Wasps announced that the Fijian international will join the club ahead of the 2017/18 campaign, the club’s 150th Anniversary season.