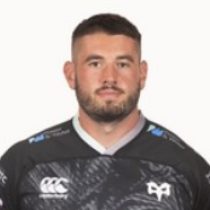 The 22-year old from Newcastle Emlyn moved to the Ospreys two years ago from Carmarthen Quins.

Capped at age-grade level, Thomas was an integral part of a successful Wales Under020 squad that reached the Junior World Championship semi-final in 2012 before going one better a year a later, reaching the final for the first time.

Thomas made his debut in an LV= Cup clash with Saracens at the Gnoll in November 2014, his PRO12 debut coming two weeks later against Leinster in Dublin. Just a week after that, he featured against Racing Metro in the European Cup.

Ospreys handed young prop Thomas a three-year contract, committing to the region until the end of the 2018/19 season.

In May 2017, Thomas was called up to the Wales summer tour squad in place of the injured Rob Evans. Thomas is yet to start a league game for the Ospreys.