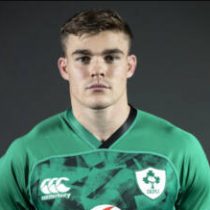 Ringrose attended Blackrock College, winning the Senior Cup in 2013 scoring a try and 10 points off the tee in the final.

During his early school years, Ringrose played scrum-half for the Blackrock JCT, then shifted to full-back in second last year of school rugby.

Ringrose joined the Leinster sub academy in the summer of 2013 before going onto represent Ireland in the U20 6 Nations in 2014, leading to an inclusion in 2014 JWC squad in New Zealand.

A member of two U20 6 Nations Championships & Ireland U-20 Junior World Cup squads (2014/2015) Ringrose was nominated for IRB World U20 Player of the Tournament in NZ, 2014, for his exploits which included 3 tries.

He joined the Leinster Academy for the 2014/2015 season & made great strides with the Leinster A side in the B&I Cup scoring tries while playing on the wing.

Following an impressive display on his debut season (2015/2016) with Leinster making 22 appearances, scoring 3 tries. Garry was also short listed for The Nevin Spence Young Player of the Year Award, following his breakthrough season.

A product of the Leinster Academy side, Ringrose was awarded with a contract on professional terms with the province for the 2016/2017 season.

Ringrose quickly became a regular starter with Leinster who caught the eye with his natural ability to beat defenders and work rate in defence.

He also started against New Zealand and scored his first try in the win over Australia in the final game of the November series.

Ringrose continued his fine form from the November Series by scoring his first Champion's Cup try in the away win to Northampton Saints at Franklin's Gardens & bagged his first brace of tries in a man-of-the-match performance against Zebre in the Pro12.

Played in every round of the 2017 6 Nations Championship. In March 2017, he was shortlisted for the EPCR European Player of the Year 2017.

In May 2017, Ringrose was named as the Nevin Spence Young Player of the Year award after cementing himself in the Ireland midfield and impressing with Leinster.

Ringrose was then named in the Ireland squad for the November tests, and with 20 Ireland appearances in May 2019 he was named in the RWC Training Squad, finishing the tournament with 28 appearances.

As of November 2019, Ringrose has represented Leinster 65 times and has scored 80 points.

Ahead of the 2019 Champions Cup, he had 24 appearances in the tournament, scoring 5 tries and 25 points.

Ringrose cemented his name in the Ireland squad for the 2020 Six Nations with 28 caps.