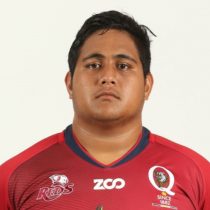 Gavin Luka is of Samoan heritage but grew up in Ipswich and his rugby career playing schoolboy rugby league for Woodcrest State College and Keebra Park State High School.

In 2013 he received a sporting scholarship to attend the prestigious Nudgee College, and it was here that his rugby career kicked off.

He went on to represent Australia at the 2017 Junior World Championships before being included in the Queensland Country side for the 2017 NRC.

His performances for the side saw him being included in the Reds wider training squad for the 2018 season.