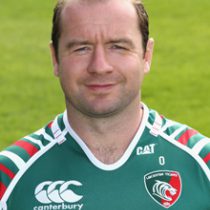 Arriving in Leicester from Ireland as a teenager, Murphy made his Tigers debut against Rotherham in November 1997.

He made 322 appearances for the club, scoring 93 tries in a total of 691 points, as well as playing in 72 Tests for Ireland and making seven appearances (including Tests against Argentina and New Zealand) with the British & Lions.

Murphy started his coaching career by leading Tigers to the Premiership Sevens Final for the first time in August 2013 and took a lead role in the run to the Anglo-Welsh Cup in 2016/17 as Tigers became the first three-time winners of the tournament.

In May 2017, he was inducted into the Rugby Players Ireland Hall of Fame at Zurich Irish Rugby Players' Awards.

Murphy was then was appointed Interim Coach of Leicester Tigers as Matt O'Connor was sacked after the club were hammered 40-6 by the Exeter Chiefs in September 2018.

In January 2020, he was appointed Tigers' director of rugby.

In November 2020, Leicester Tigers announced that Murphy had left his role as Director of Rugby at the club.