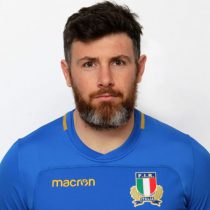 George Fabio Biagi was born in Scotland to Scots Father and an Italian Mother, and later returned to Italy to study. He has stated he has equal allegiance to both countries.

Biagi started playing rugby at the age of 13 at Fettes College, Edinburgh. He attended Bocconi University in Milan and started playing with Grande Milano, the following year he moved to Amatori Milano.

He was signed by Cavalieri Prato with whom he got promoted to Super 10 (now National Championship of Excellence), and qualified for the European Amlin Challenge Cup. Then subsequently transferred to Aironi where he has played since the 2010/2011 season in the RaboDirect Pro 12 and the Heineken Cup.

2012 saw him sign for Bristol, but later returned to Italy, joining Zebre Rugby.

In January 2017, he was included in Italy's squad for the 2017 Six Nations tournament, where he added to his 9 caps.

In July 2020, he announced his retirement from rugby to become operations manager at Zebre Rugby. He retired having made 119 appearances for the PRO14 club, 51 as captain, and had scored seven tries during a seven-year stint.

He leaves the playing field after 23 caps for Italy.