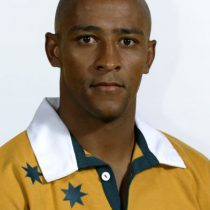 Gregan was born in Lusaka, Zambia. Gregan was a talented sportsman in his youth and excelled in cricket and golf from an early age, he also represented Australia rugby at under-19 and under-21 level.
While studying at the University of Canberra and was selected into the ACT provincial team. He was included in the ACT team that took part in an invitational Sevens tournament in Fiji, where he impressed ex-Wallaby Greg Cornelsen, who informed the Australian Sevens coach Glen Ella about this young halfback. He was then called into the national Sevens and represented Australian Under 21s.

Having made an immediate impact at ACT Gregan was called into the Wallabies squad in 1994 and debuted against Italy in Brisbane.

Later that year, Gregan made a famous try-saving tackle on All Black Jeff Wilson that directly led to Australia winning the Bledisloe Cup that year and is much remembered as one of the greatest moments in the Wallabies-All Blacks rivalry. After two caps against Argentina the following season, Gregan had so far been on the winning side in all of his international games as Australia entered the 1995 World Cup in South Africa as defending champions.

Gregan formed part of the Brumbies team that took part in the first Super 12 in 1996. That season Gregan appeared eight times for the Wallabies, including solid wins over both Wales and Canada in Brisbane, scoring a try in the Canadian clash. In 1997 he was elevated to the vice-captain of the Wallabies, ahead of the Tri Nations Series.

After winning in two matches against the Irish, and one against England in the winter of 1999, the Wallabies ended up finishing in the middle of the table for the 1999 Tri Nations Series, though they were still favourable entering the 1999 World Cup held in Wales. Australia finished at the top of Pool E, winning all their games, with Gregan playing in the matches against Romania and Ireland and he was rested in the final pool game against the USA. The Wallabies went on to defeat hosts Wales in the quarter-finals at the new Millennium Stadium with Gregan scoring a try, putting Joe Roff into space and then taking the scoring pass and entered the final after defeating defending champions South Africa in a gruelling semi-final. The Wallabies became two-time World Champions after defeating France 35 to 12 in the final.


After the international retirement of John Eales in 2001, Gregan was announced as Wallabies captain. He was an obvious choice to fill the role, as it would be a natural progression from his position as vice-captain, as well as the fact that Gregan was a virtual automatic selection for the national team.

Gregan played in all of Australia's 6 matches at the 2003 Rugby World Cup. Following Australia's loss to the English in the World Cup, Gregan led the Wallabies on a massive winning campaign during the 2004 season. Under Gregan's captaincy, Australia lost just three matches in 2004, one against South Africa, one against New Zealand 16-7 in New Zealand and then against France in Paris. In July during the 2004 Tri Nations Series, Gregan ran out at Subiaco Oval in Perth against South Africa for his 100th Wallaby test.

Gregan missed out on a lot of the 2005 Super 12 season after breaking his leg during a game against the New South Wales Waratahs in Canberra. He returned for the match against Italy in Melbourne, which the Wallabies won 61 to 29. With his start in the final match of the 2005 Tri Nations at Eden Park in Auckland against the All Blacks, Gregan equalled England's Jason Leonard as the most-capped player for a national team in Test rugby, with 114.

After the matches against the English and Irish, the Wallabies entered the 2006 Tri Nations Series and two weeks later the All Blacks came to Brisbane for the Bledisloe Cup clash, in which Gregan equalled John Eales' record for most caps as captain of Australia, 55. In the subsequent match against South Africa in Sydney, Gregan passed Eales' record, becoming the most capped Australian captain of all time.The Wallabies managed to scrape home 20 to 18.

Gregan played his last home game with the Brumbies on 28 April 2007; leading his team to a victory over the Crusaders. Fittingly, this was also the last home game for his teammate Stephen Larkham. The two were farewelled with the announcement that a stand at Canberra Stadium would be named after them.

Gregan played his final match for the Wallabies when they faced England in the Quarter-finals, a match that they lost 12-10.

In June 2008 it was announced that he had joined Suntory Sungoliath in Japan, following a season at RC Toulonnais in the French Top 14.