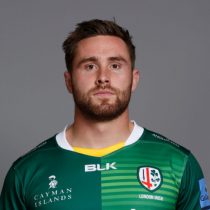 George played a big part in helping the England Under 20's win the 2017 U20 World Championship and was named in the team of the tournament.

The second-row signed a 5-year deal with the club Sale Sharks in March 2017, committing his long-term future to the club.

George came through the club's Academy system, who reached the academy final in 2016/17 season for the first time in the club's history.

In August 2019 he made the switch from Sixways to London Irish.

After 37 appearances for the club, Nott signed a contract extension with the Exiles.