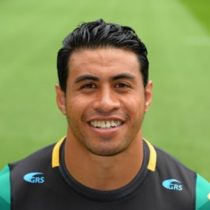 Born in Samoa, centre George Pisi joined Saints in 2011 having started his professional career in 2005 for North Harbour. In 2006 he made his debut for the Auckland Blues, making 18 appearances. He left the Auckland area in 2010 and had two short spells at Taranaki in 2010 and 2011, with a stint at Clermont Auvergne sandwiched in between.

Following his arrival at the Saints, George made an immediate impact and was named in the Aviva Premiership Dream Team during his first season at the Club. His impressive debut season also saw him pick up the Saints Players’ Player and Supporters’ Player of the Season awards as well as being named in the ESPN Dream Team.

The 2013/14 season saw George play a role in the Club’s domestic and European cup double, starting both finals, and scoring a try in the 2014 Aviva Premiership final win over Saracens.

On the international scene, George represented New Zealand at Under-19 and Under-21 level having moved to Auckland with his family at the age of three. He made his full international debut for the country of his birth, Samoa, in 2010 and has amassed 19 caps, scoring three tries.

Northampton Saints confirmed that Pisi will be leaving the club at the end of the 2016/17 campaign.

Pisi returned to New Zealand and will represent North Harbour in the Mitre 10 Cup.