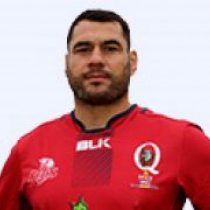 One of the greatest loose-forwards to play the game, Smith started his long illustrious career in ACT and at the Brumbies in 2000.

In two stints at the club he amassed over 140 caps scoring 80 points. The back rower has made over one-hundred appearances for his country, establishing himself as the second most capped Australian forward of all time and the youngest player to ever reach a century of test caps for the Wallabies.

Between 2006 and 2009, Smith was the Australian Super 14 Player of the Year over four consecutive seasons.

In a remarkable domestic career, Smith has demonstrated his immense quality at clubs in both hemispheres. In twelve seasons with the Brumbies, he was voted Players' Player eight times, seven of which came in successive seasons between 2002 and 2008.

In 2010, Smith made the move to France where he represented Toulon, Stade Francais and Lyon as well as playing for Japanese side Suntory Sungoliath on a dual agreement.

He scooped the Player's Player of the Year award at the 2016 RPA Awards as well as Forward of the Season at the Premiership Awards on May 18th 2016.

Smith returned to Australia ahead of the 2017 Super Rugby campaign, this time joining Queensland Reds.

He signed for Suntory Sungoliath in the Japanese Top League with plans to return to Queensland for the 2018 Super Rugby season.

In June 2018, Bristol Bears signed the former Australia captain on a six-month injury cover deal, ahead of their return to the Premiership.

He featured in every top-flight game in the 2018 season, helping Bristol to two wins from their opening six fixtures.

In October 2018, the decorated Australian international mutually agreed to an undisclosed contract extension with Bristol Bears.

May 2019 saw him announce his retirement from rugby having amassed 111 caps for Australia and 164 Super Rugby caps.