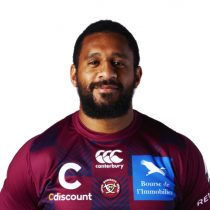 George Tilsley made history in 2013, becoming the first native Papua New Guinean to represent New Zealand in international competition. Having moved to Wellington at the age of 8, Tilsley's talent was instantly recognised as a fleet-footed attacker who could unlock most defences.

Tilsey would go onto represent Manawatu in the Mitre 10 Cup while representing the All Black 7's.

In 2015 he headed off to France to join Agen. He spent three years at the club before signing with Bordeaux Begles ahead of the 2018/19 season.