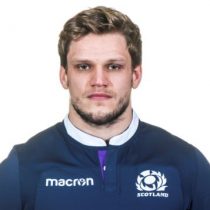 Turner has represented Scotland at U18 and U20, earning selection for the 2012 age-grade 6 Nations and Junior World Championship in South Africa.

He has also played for Edinburgh under-16, under-17 and under-18 and was in the Scotland under-17 training squad in Spain in 2009. Turner was named Man of the Match when Stewart's Melville Lions won the national S1 championships in 2005.

He received his first call up to the senior Scotland squad on 22 February 2016 for the 2016 Six Nations Championship but was replaced in the squad by Fraser Brown on 7 March 2016.

In July 2017 he joined Glasgow Warriors on a season-long loan from Edinburgh, and was later called into Scotland's 36-man squad for the November Internationals.

He made his Scotland debut in the 2017 Autumn Tests playing in the games against Samoa and New Zealand at BT Murrayfield.

In January 2018, Turner committed to Glasgow Warriors signing a two-year contract until at least May 2020.

In February 2019, he joined the Scotland Six Nations squad ahead of the clash with France before being named in Scotland's 42-man training squad for the Rugby World Cup.