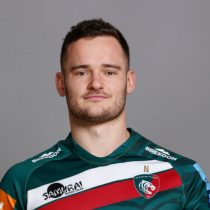 The 2016/17 season provided George Worth with his senior breakthrough appearances in the Aviva Premiership, European Champions Cup and the successful Anglo-Welsh Cup run.

As a full-back who can also play centre, Worth started the Anglo-Welsh Cup semi-final against Saracens – when he scored his first try for the club in their first-ever win at Allianz Park – and also started the Final win after making his European debut against Munster at Thomond Park.

He gained more senior experience with Nottingham before returning for the Premiership Round 22 win away to Worcester Warriors which secured Tigers’ place in the knockout stages of the tournament.

George and schoolmate Will Evans joined the Tigers academy from Wymondham College in Norfolk and Worth made his first senior appearance in the Kings of the North tournament in the pre-season of 2015. His league debut followed against Bath at the end of the 2015/16 season.

He gained England Under-20s honours during the 2016 Six Nations, playing at centre. By January 2020, Worth made more appearances (14) than any other member of the Tigers squad during the 2019/20 season before he penned a new deal with Tigers after making 50 appearances.

By July 2020, the versatile back, capable of playing almost anywhere across the back-line, made 57 senior appearances since his debut towards the end of the 2015/16 campaign as a 19-year-old before signing a new contract extension with Tigers.