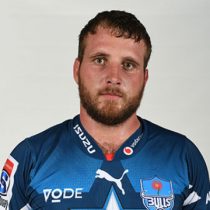 Former Potchefstroom Gimnasium captain Gerhard Steenekamp has played provincial rugby against some of the country's top young players as he represented the Leopards at multiple youth level before joining the Blue Bulls after school.

He represented the Pretoria based side at under 19 and was named in the Bulls wider training squad ahead of the 2017 Super Rugby.

Later in 2017 he was selected in the South Africa U20s squad for the U20 World Championship.

In August he signed a deal that will see him remain in Pretoria until 2019 at least.