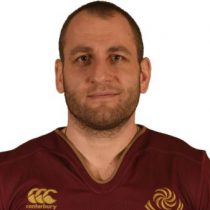 Nemsadze spent nine years in France, featuring for the likes of Montauban, Agen and Tarbes, and has been with Bristol since the summer of 2016.

Nemsadze joined Bristol Rugby ahead of the 2016/17 Aviva Premiership campaign, arriving from Tarbes in the French ProD2.

Nemsadze has also played for Montauban and Valence d'Agen among others.

He has captained Georgia to European Rugby Championship (also known as Six Nations B) success over the last eight years, the Lelos defeating Romania in Tblisi (March 18) to seal a seventh title in eight years.

In March 2018, the 81-Test cap Georgian agreed to join Ospreys in the Pro 14 on a short-term deal until the end of the season.

The experienced Nemsadze can play in the second row and at flanker and his sizable presence provides another option up front for the Welsh region.

In May 2018, Ospreys confirmed that Nemsadze will remain with the Region for the 2018/19 season after earning an extension to the short-term deal he signed in March.