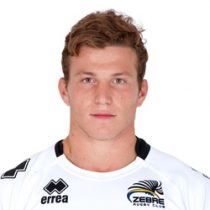 Born in Agrigento and raised through Miraglia Rugby and CUS Catania, Licata has been a key player in Italy’s U18, 19 and 20 sides in the recent past.

He featured in some memorable clashes during the Under-20 Six Nations, scored three tries at the 2016 Junior World Championship (two in the victorious relegation final against Japan) and was one of Italy’s best performers at the 2017 edition that saw the Azzurrini finish eighth for the first time ever.

The former member of the Accademia Nazionale Ivan Francescato also has some experience in Sevens Rugby under his belt, and as a result he possesses footwork and agility not common for a player of his size.

He was first called to join the Zebre squad last year, but he had to wait the beginning of the 2017/18 season to make his professional debut.

A good scrummager and excellent option in the lineout, he is an effective tackler and a reliable defender, but the experience he’s gaining with Zebre in the Guinness PRO14 may very well turn him into a dominant force at the breakdown.

In January 2018 he was included in Italy's Six Nations squad but went on to miss the 2019 RWC and was recalled ahead of the 2020 Six Nations.