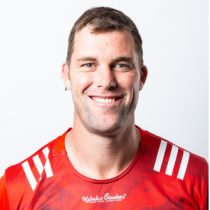 Hattingh joined the Western Province Vodacom Cup team after the completion of the 2012 Varsity Cup and made his provincial debut in April 2012 against the Eagles in Oudtshoorn.

Hattingh received a call-up to the Lions and he made his Super Rugby debut in April 2012.

Hattingh has made 20 appearances, scoring 15 points for Japanese Top League side Kubota Spears, having joined in 2015.

In December Hattingh was named in the Sunwolves 2018 Super Rugby squad.