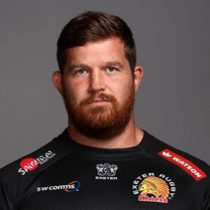 Dubbed by many as extremely unlucky not to be chosen in the Wallabies’ 2012 setup, Greg has been a major asset for the Reds with his ability to feature on either side of the scrum at loosehead or tighthead prop invaluable to the team’s success.

2006 was the making of Greg, who played in every Super 14 match that year. Despite a shoulder aggravation, Greg soldiered on through the season and was duly rewarded with selection in the Wallabies squad, where he soon cemented himself as the top loosehead prop in the country before a neck injury ruled him out of the end of year Spring Tour.

After an announcement in December 2015 that Holmes will be calling time on his Wallabies career and joining Exeter Chiefs for the 2016/17 season, Holmes made his last appearance for the Reds when he was named in the front-row for the club's final game of the 2016 season.

With 27 international appearances and 144 Super Rugby games for the Queensland Reds under his belt, Holmes made a return to Australia and signed with the Western Force ahead of the Super Rugby AU competition in 2020