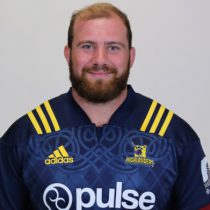 An up-and-coming front row forward, Greg Pleasants-Tate comes to the Highlanders from Blues after being named in the team wider training group in 2015.

Mobile for a big man and one of several 2011 Junior World Championship-winning New Zealand U20 players in this side, Pleasants-Tate was in impressive form during the 2014 ITM Cup where he was one of the standout players for his North Harbour side, logging over 700 minutes across 10 games and scoring a try against Bay of Plenty, a provincial union which he previously represented.

Although he is now well-established in the number one jersey, the Wanganui-born prop spent a bit of time in the middle of the front row while at Takapuna Grammar.

He made his Super Rugby debut for the Blues in 2015 and was contracted by the Highlanders in 2016. He has made 8 Super Rugby appearances heading into the 2017 edition of the competition.

Pleasants-Tate made 5 appearances for the Highlanders in 2017 and came off the bench for his side against the British and Irish Lions.

Pleasants-Tate took his Super Rugby cap tally to 17 by the end of the 2018 season and has since made the move to Canterbury ahead of the Mitre 10 Cup.